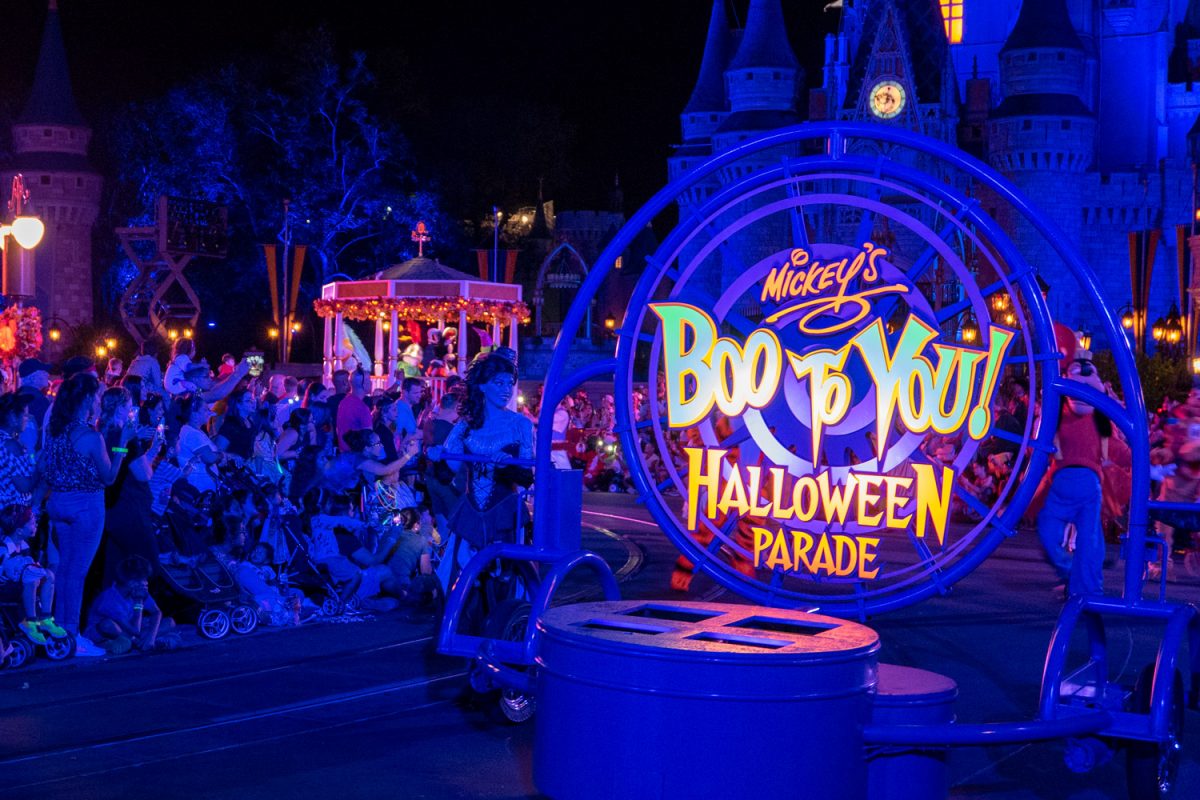 “All magic comes at a price”

If you watch Once Upon a Time then you’ll know that Rumplestilskin regularly reminds us that “all magic comes at a price” and he isn’t wrong. In fact the price for magic in Walt Disney World comes at quite a large price, in money terms it does anyway 😂 So my point is that is the magic of Mickey’s Not So Scary Halloween Party worth the price?

Slightly off topic but before I move on, if you are a Disney fan and you are yet to experience the joy of Once Upon a Time, I recommend you starting watching it, after you’ve finished reading this post first of course!

It is no secret that Walt Disney World is an expensive holiday whichever way you do it. The saving and spending can feel never ending and definitely not for the faint hearted, and that is before you even get there.

It can be difficult to decide if a Special Ticket Event is do-able in your budget and worth the extra saving and spending. There are so many extra events available now for the various Disney Parks that it can be quite overwhelming. The typical events to try are Mickey’s Not So Scary Halloween Party and Mickey’s Very Merry Christmas Party. I have been to Mickey’s Not So Scary Halloween Party most recently so that is what I’m going to cover for now.

I’ve broken up this post into various sections, so feel free to skip ahead to the one that you are looking for!

Mickey’s Not So Scary Halloween Party (MNSSHP)
The Basics 🎃

When? Party dates are now earlier than ever with dates as early as mid-August. After that, there will be a party 2-4 times a week until November.

Time? Every Not-So-Scary starts at 7pm sharp until the clock strikes midnight.
You don’t need to stay until midnight to experience everything. Each show etc. will have a time early in the party and will repeat towards the end, meaning everyone gets to see everything regardless of if you hang around until midnight.
Top Tip: You can enter the park before 7pm, around 4pm instead, so you can be in line for your favourite characters before the party even starts.

How do you book tickets? You can buy tickets whilst you are visiting Walt Disney World or book them online on the Walt Disney World website before you go. Alternatively, I know Attraction Tickets Direct also sell tickets for Mickey’s Not So Scary and Mickey’s Very Merry Christmas Party. I’ve not used them for those tickets before though, so I can’t advise what my personal experience doing this is. We have always booked online direct through Disney and have never had a problem.

Cost? Tickets range in price depending on the date you pick. Typically the earlier the date, the cheaper it will be with prices getting more expensive as you get towards Halloween. Weekends are also generally more expensive than weekdays. They range from around $80 to $115 so not the cheapest experience. Adults are aged 10+ and Children are 3-9 years, unfortunately though you are only looking at a price difference of about $5 between the two.

How does the party work? You enter the Magic Kingdom as you usually do by scanning your MagicBand at the entrance. Before you head into the park you will be given a wristband identifying you as attending the party. You’ll wear this it for the rest of the night and take it home as a keepsake. You will also be given a map which will show you the spots for trick or treating, character meets and times for the exclusive shows.
Once you get into the park, you’ll be guided to your first Trick or Treating spot, given your Trick or Treat bag and then you are free to spend the night however you wish. You are official in the party and ready to enjoy the Halloween fun!

What is the Fancy Dress Code for Adults? Disney have a full list of guidelines to follow here.The general rule though seems to be that if you are an adult, you can’t dress too much like a character you would meet in the parks. You can dress similar to your favourite character (a Disney Bound) but they draw the line at signing autographs and having photos taken with guests. Definitely read the full rules before you plan your outfit.

So….why is Mickey’s Not So Scary Halloween Party worth the money? What does the party involve?

Characters – One of the biggest draws of the special parties is the exclusive Character Meet and Greets. You can meet The Seven Dwarfs, Winnie the Pooh and Friends in their Halloween Costumes, Minnie, Goofy and the gang in their Halloween Costumes, Lots-o’-Huggin Bear and many more. You’ll probably find a lot of these rare characters will have a lengthy queue to meet them. We went close to the park closing and didn’t have to wait much more than 15 minutes for Pooh and Friends.

Parade – Mickey’s “Boo-To-You” Halloween Parade is a general Disney highlight for me. It is one of the best experiences Disney has to offer in my opinion. After attending the party twice before and seeing the parade, I am still looking forward to experiencing it again this year. The grave diggers and the Headless Horseman are a highlight. I generally just love the atmosphere during the parade and the song is beyond catchy. You can watch the parade from anywhere along the route and you’ll enjoy it. The parade usually takes place twice during the party, once earlier around 9pm and again around 11pm. The second parade is known to be quieter as typically the families with younger kids have gone home by that point.

Special Entertainment – Alongside the parade and the fireworks, there is a Castle Stage Show. You can watch the Hocus Pocus Villain Spectacular at various points in the night, when I last went you had 4 opportunities to watch the show. Usually you’ll find there will be two showings early in the night around 8pm, then again after the first parade and again after the second parade.

Fireworks – In 2019 Disney are debuting a brand new fireworks show for Mickey’s Not So Scary Halloween Party. Hallowishes is no more and Disney’s Not-So-Scary Spectacular will be lighting up the sky. If Hallowishes is anything to go by, it will be out of this world. You just have to see the fireworks, they are beyond amazing. The parties are the times when Disney bring out the perimeter fireworks which means fireworks go off all around you, there is nothing like it. From my experience, the party is worth it just for the fireworks and the parade. Everything else just makes it even more magical.

Exclusive tasty treats and Trick or Treating – I think we have Instagram to thank for the range of weird and wonderful Disney snacks now available. Not-So-Scary is no different. You’ll be able to sample (for an added cost) a selection of sweet and savoury treats across the park. The map you are given upon entry will tell you what you can get where. The map will also point out the Trick or Treat stations. You’ll be given a Trick or Treat bag along with your map and wristband at the start of the party. You can then spend as long as you like going to the various stations to fill up your goodie bag. Top Tip: Whilst I’ve never done this personally, people have been known to just empty the Trick or Treat bag into your own backpack so you can make the most of the free treats.

Do you have an allergy or food intolerance? You can still Trick or Treat.

I was a little concerned I’d be left out of the fun when it came to Trick or Treating as lets be honest it is the best part of Halloween as a kid so who wouldn’t want to have a go as an adult?
When you enter the party and they go to give you a trick or treat bag, tell them you have a food allergy. They will then give you an Allergy Trick or Treat bag. This will be a teal colour as in the US that is the colour which represents allergy.
When you go to the Trick or Treat location, they’ll see your bag and they will give you a Teal Token. You then go to one of the allocated locations and you’ll trade in the tokens you collected for a whole bunch of allergy friendly treats! I did this in 2017 and I have to say the treats are just as tasty even if they are allergy friendly and it is great to be included by Disney, although I wouldn’t expect anything less from my experience.

Magic Shot Locations – They have Photopass photographers round the park taking various ‘Magic Shot’ photographs of guests. There were about 5 different locations when I last went and they are a great opportunity to get a family photo with a twist to remember your Halloween costumes by! We had a few taken including one outside of Haunted Mansion which worked perfectly for our night as Ghost Hosts 👻

Merchandise – If you are a merchandise collector, then you’ll love Mickey’s Not So Scary Halloween Party. You can buy a good selection of exclusive to the event merchandise from select locations across the park. Your shopping options will be highlighted on the event map so you’ll know where to go. When I last went in 2017, there were 4 merchandise locations including Emporium and Big Top Souvenirs. Some pieces are known to fly off the shelves quickly, so you may want to make that a priority at the start of the party. Last time I went I was too busy doing everything else that I totally forgot about the merchandise!

Attractions – Between enjoying the special entertainment, you can ride some of your favourite attractions throughout the night. Some of the attractions will even have a spooky overlay, Pirates of the Caribbean has been known to feature Live Actors on Not-So-Scary nights.