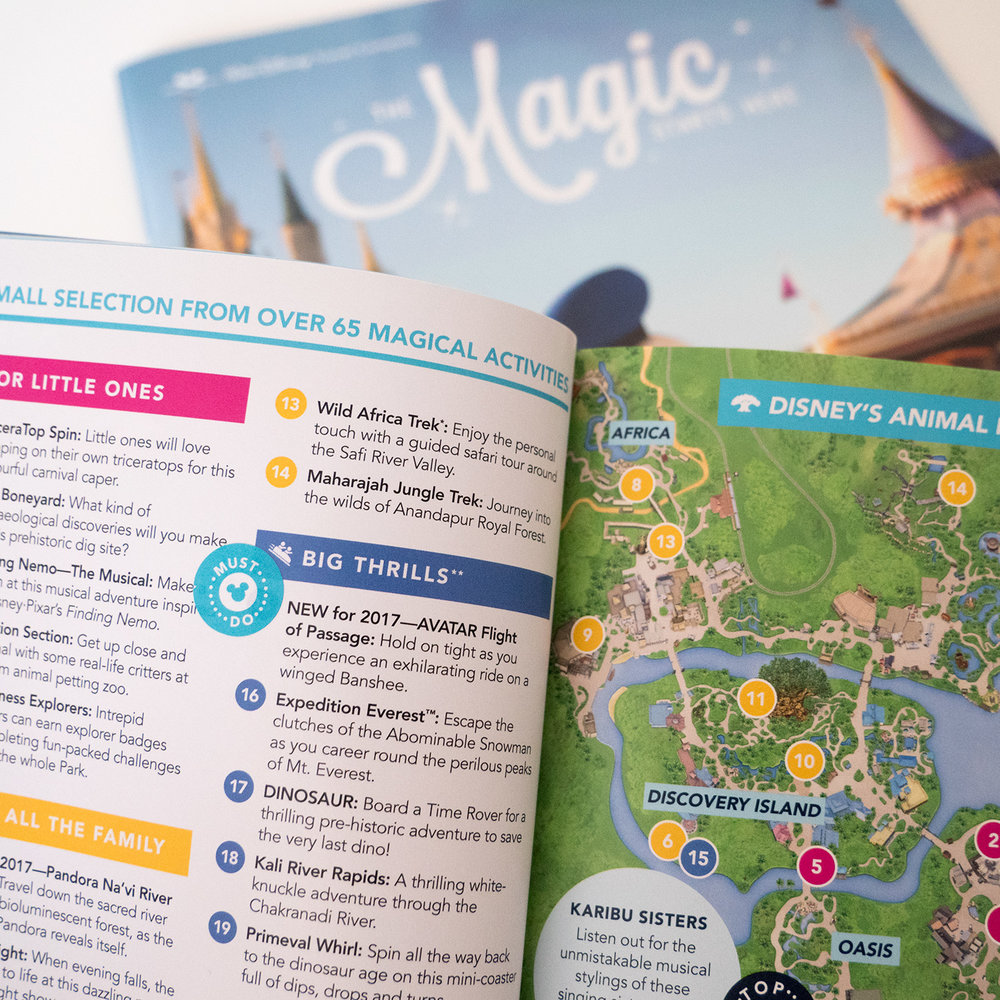 The planning has well and truly begun for my 2017 Walt Disney World Trip. I have started the spreadsheet and dining is all booked. We are getting closer and closer to the day that fastpasses can be booked. I have been excited for all my previous trips but I think I am ever so slightly more excited for this trip. I have so many things that I want to do that I haven’t done before or want to do again so I thought I would share a bit of a bucketlist.

These are just some of the things I want to do during the trip but if you think I might have missed out something really important then be sure to let me know!

Splash Mountain will be closed during the trip for refurbishment but I definitely want to ride Big Thunder Montain for the ‘wildest ride in the wilderness’. I went on Space Mountain in Disneyland Paris for the first time so I am looking forward to seeing how Space Mountain in WDW compares. I am particularly excited for Space Mountain even if there is a possibility none of my family will want to join me 😂  I also want to go on Expedition Everest (counts as a mountain right?) in Animal Kingdom. This is a ride I never thought in a million years I would go on. I’ve always been adamant that it is not for me but Disneyland Paris has made me realise I might like rollercoasters more than I think. So this trip it is finally time for me to ride Expedition Everest. I might hate it but I won’t know if I don’t try!

2. Go on Rockin’ Rollercoaster and Tower of Terror

As I mentioned before I discovered a new love of rides during my trip to Disneyland Paris in May. I have never been one for rollercoasters but I was willing to try anything in Disneyland Paris and I am so happy I was. I loved all the rides, except weirdly RC Racer which I don’t plan on doing again anytime soon! I have the same attitude for going to Walt Disney World and I am going to go on everything and anything I can, including Rockin’ Roller Coaster and Tower of Terror which were two of my favourites in Disneyland Paris. I am especially looking forward to riding Tower of Terror as soon as I can once we get there!

I have seen so much about Pandora in Animal Kingdom that I can’t wait to see it with my own eyes. It looks stunning and breathtaking in true Disney style. I love how far Disney go with theming and I think Pandora is a great example of the capability of Disney. I am desperate to go on Flight of Passage as I have heard it is one of the best rides ever which is makes me very excited! We plan on visiting during the day and the night as it is meant to be amazing during both times of the day.

4. Ride Frozen Ever After

I like Frozen but I wouldn’t say that I loved it. I’ll admit I was a little disappointed to hear that they were replacing Malestrom with a Frozen ride. I have seen a few videos on YouTube of Frozen Ever After and I think that I will actually really enjoy it. The animatronics look amazingly advanced and I love the technology and detail behind Disney rides so I think I could be convinced that replacing Malestrom was a good idea.

I am definitely a loyal Magic Kingdom fan. Magic Kingdom is just everything that is special and magical about Disney to me. I have always said that Hollywood Studios is my second favourite park but I don’t love love Animal Kingdom and Epcot. If that makes any sense at all.

Since my last visit Animal Kingdom has changed so much and I think I will completely fall in love with the park and what it has to offer now. The Tree of Life Awakening and Rivers of Light are definitely high of my list of things I want to do whilst in WDW. I am also going to be more open minded about Epcot. I want to explore each country better and appreciate the park as a whole more. I think now I am older I’ll be able to appreciate and love Epcot a lot more.

I can’t wait to see the Festival of Fantasy parade! There is nothing like watching a parade in the Magic Kingdom. I have seen clips and I am particularly looking forward to the Tangled float with Rapunzel and Flynn!

7. Watch Happily Ever After

I still haven’t quite accepted that I will never hear Wishes play in Magic Kingdom again and I’m not sure I ever will. Whilst that might sound a little dramatic, I’m sure there are plenty of people will understand my attachment to Wishes. I absolutely loved Wishes and it is something I looked forward to seeing each holiday. I am sure that Happily Ever After will blow me away and I will end up loving it as much as I did Wishes. I can’t wait to see it and we are planning to watch it multiple times during the trip.

8. Mickey’s Not So Scary Halloween Party

We have been to the Not So Scary Halloween Party before but I was a lot younger then so I don’t really remember much. I have read a lot about the party in the past few weeks and I am so happy and excited that we are going. I am looking forward to meeting some rare characters, seeing the exclusive parade and fireworks. I have heard you can meet the Winnie the Pooh characters in Halloween costumes which sounds like the most amazing thing if you ask me! I am going to try and put together some form of Disneybound for the night as I think that is the easiest way to avoid any of the adult Halloween costume restrictions.

One thing I was never able to do during the Halloween/Christmas party in WDW was eat any of the treats they had. My nut allergy made it impossible for me to join in any food related benefits of going to the party. I have read articles that they now have allergy friendly trick or treat sweets at MNSSHP which I am super happy to hear. I will be putting it to the test during our visit and of course blogging about it afterwards to share my experience.

You haven’t gone to Disney if you haven’t eaten a few too many Mickey Ice Cream Bars. I will be eating all the Mickey Ice Cream Bars that you can imagine and the same goes for Frozen Lemonade. I get slightly obsessed with both every time we go to Walt Disney World. I’m looking forward to eating breakfast with Disney characters which we are doing plenty of times during our stay. I’m also looking forward to visiting Cosmic Ray’s as it is always somewhere we visit during our trip as well as Casey’s Corner on Main Street.

Every time I have been to Walt Disney World I have known about my nut allergy. I was a lot younger a lot of the time so my parents had more control over dealing with my allergy than I did. Since our last trip I have become extremely independent when it comes to my allergy and personally I worry about it a lot more than I did when I was younger.  As I did with Disneyland Paris (post here), I am going to be documenting my experience in WDW with a severe nut allergy and will definitely share that here for anyone who it might help. If there is anything in particular you would like me to include then be sure to let me know.

Pixar Live! is a new show in Hollywood Studios. The reason I say I will watch it ‘if I can’ is because it is only scheduled to be in Hollywood Studios until the end of August. I am hoping that because it has been received so well that it will be extended and I will be able to see it in October. I am a massive Pixar fan and I think that the show looks amazing. I can’t imagine what it is like to listen to a live orchestra play Married Life from Up. I am definitely keeping everything crossed that the show is a possibility 🤞🏻

This is a given on any Disney trip. I am a tad obsessed with Disney merchandise so much so that half my wardrobe is now Disney and I’m not even exaggerating. I know that I won’t be able to resist the sheer volume of Disney merchandise in WDW. I have a rough idea of some of the items I would like to pick up whilst there. I will most likely extend my Disney wardrobe by shopping in Uniqlo. I love Disney pins so I know I’ll be purchasing some and trading some pins throughout the trip. I also have a Pandora bracelet so I’ll definitely be picking up at least one Disney charm. I’ll be watching and reading plenty of WDW hauls before I go to see what the merchandise is like!

There are some characters that I would really like to meet including Mickey Mouse and Winnie the Pooh of course. I would also like to meet Rapunzel and I definitely want to meet the characters from Up. We have a few days where we have a character breakfast so I will of course meet the main characters then which is good as I love meeting Minnie, Mickey and the gang.

13. Spend some time solo in the parks

I have always been too young to separate from my parents on previous Disney trips. As it has been a few years since our last trip I can now head off and explore Disney solo. I’ll spend the majority of my time with my family but it will be nice to go off and do something different if I want to. I’ll most likely be spending the time snapping away for Instagram and my blog.

14. Go on more rides in Universal Studios and Island of Adventures

Whilst this is not Disney related, it will be part of our trip to Walt Disney World. We always go to Universal Studios for 1 day of the 2 week holiday. We are bigger fans of Disney so it makes sense that way. During previous trips we haven’t ridden many rides in either of the parks as it has been so busy. The first week of our holiday this year isn’t during any school holidays so we are hoping Universal Studios won’t be as busy. I am hoping to go on a lot of the rides including the Despicable Me ride and more importantly Harry Potter and the Forbidden Journey.

If you have any suggestions of things that I might not have thought of then be sure to let me know! I would love to know if anyone else is heading to Walt Disney World soon and what you are looking forward to the most. I can’t wait to be back in the most magical place on earth, not long now!