After talking Disney Parks during this weeks Disney Bloggers Chat on Twitter, I felt inspired to write a bit about my general Disney Park thoughts and opinions. Disney Parks are my favourite aspect of Disney by a mile. There is nothing like being in a Disney Park for me.

I thought I would do ‘The Disney Parks Tag’! The Disney Parks tag is pretty self-explanatory and I’m quite surprised I haven’t done it yet. It was created by one of my favourite Disney vloggers, Adam Hattan. You can watch his original video here. There are 10 questions to answer about the Disney Parks.

I have been to Disneyland Paris and Walt Disney World, so these questions will focus on just those two resorts. I would love to go to the rest for the Disney Parks of course, one day! 🤞🏻

1) When was the first time you visited a Disney park?

My first visit to a Disney Park was Disneyland Paris for my 5th birthday in 2003. It is by far the coldest trip I’ve ever been on, as my birthday is in the middle of November. If you’ve visited in the Winter you’ll know what I mean! I’ve returned since that trip, but it is still the only time I’ve ever been for the Christmas season and for my birthday, both of which I would love to do again one day!

My first visit to Walt Disney World was in 2007. We stayed at Caribbean Beach over Christmas. You could say we enjoyed the trip, as well returned every year until 2010. 2007-2009 I was completely obsessed with High School Musical and Hannah Montana. I don’t think that there is a photo without me wearing something from one of the two.

2) What is your favourite Disney park?

It is so hard to pick one favourite park! If I had to pick one, I would probably pick Magic Kingdom in Walt Disney World. Magic Kingdom seems to have the most classic Disney magic for me. I also love the fireworks they do, the parade and basically everything about it. I love all the parks in Walt Disney World pretty much equally though, they all have something special to offer. 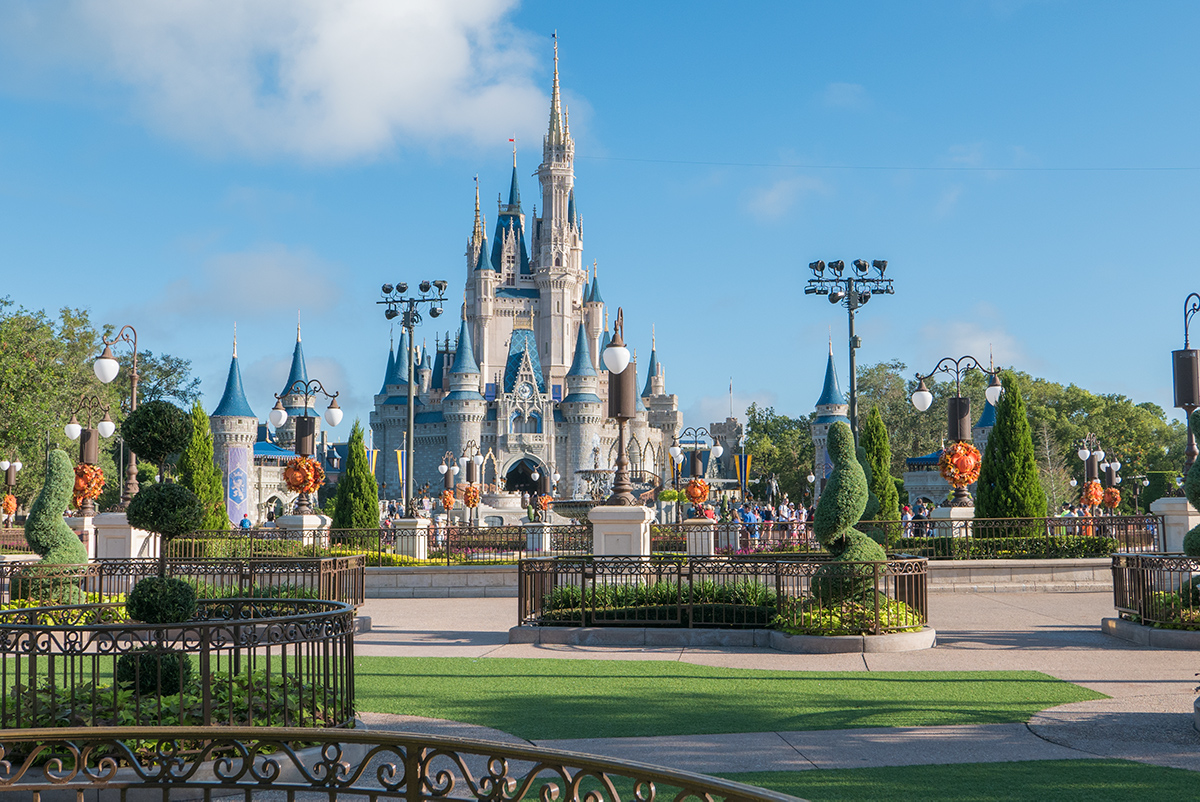 In Disneyland Paris, Disneyland Park is my favourite. Sleeping Beauty Castle is absolutely stunning. I looks just as beautiful from every angle and is almost an attraction in itself. I also love Fantasyland in Disneyland Park, It’s a Small World has such beautiful theming. I do still love Walt Disney Studios though, despite the reputation it gets. 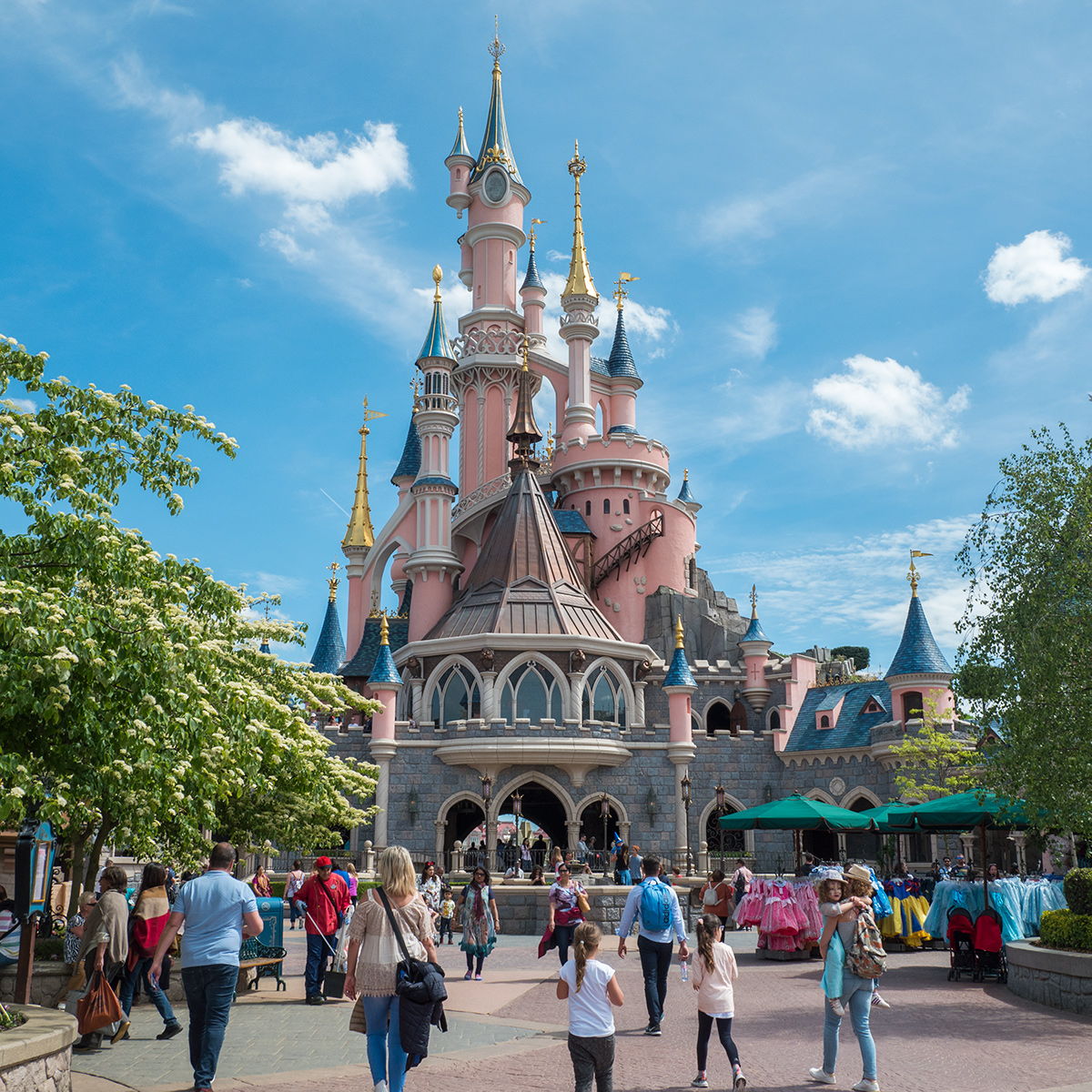 3) What is your happiest single moment in a Disney park?

There is one night in Walt Disney World that completely stands out for me, which I talked about during the twitter chat this week. We had decided to go on Pirates of the Caribbean before going to watch Main Street Electrical Parade. I said that I had always wanted to know what the ride was like with the lights on… which in hindsight wasn’t the best thing to say. We ended up breaking down and had to be evacuated.

They had cast members in the water to pull the boat backwards towards an exit. We had to climb out of the boat to the side where all the animatronics are and leave the ride round the back of the building. It was such a weird experience. We made it just in time for the parade, and watched from Adventureland.

It was the later performance, so we were basically the only people in the whole area watching. I had my camera and all the characters posed for me and it was such a great experience. It also turned out to be the last time I would see Main Street Electrical Parade. If you’d like to see the photos from that night then you can check out the blog post here! 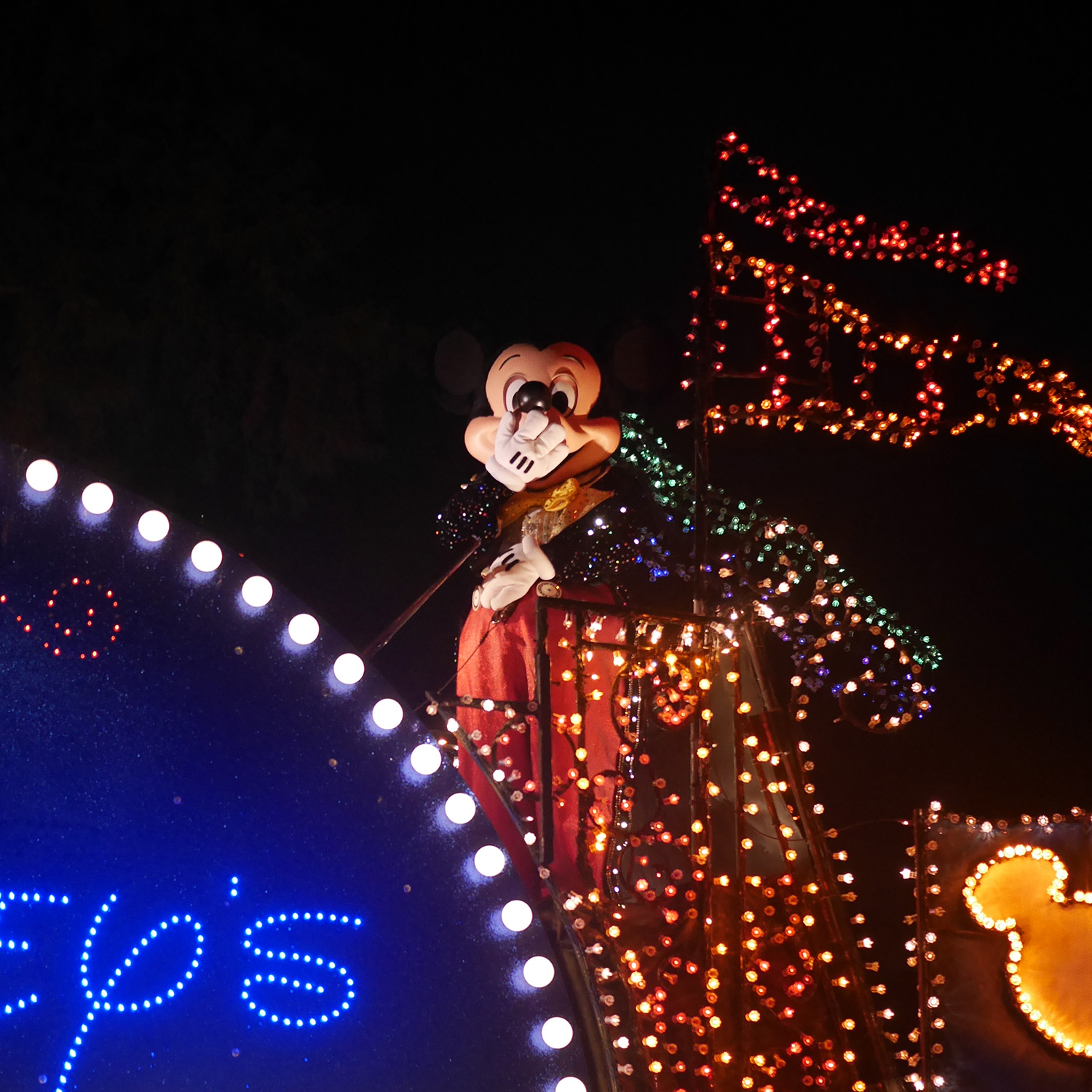 4) What is your favourite Disney parks purchase?

Who knew these questions would be so hard! I do buy a lot when I visit the Disney Parks, but I’m quite particular so I tend to love all my purchases equally. I’m a big pin collector and honestly I’d be a little bit heartbroken to part with any of them, I’ll save my pin collection for a whole other post at some point.

As much as it pains me to pick just one piece of merchandise, if I had to pick just one Walt Disney World purchase, it would have to be my Best of Mickey Dooney & Bourke Bag. I bought it on my trip last year. I’d thought about it before I went and whilst I was there so much and I couldn’t be happier that I decided to get it. It is such a beautiful bag and I couldn’t love it more if I tried. It is definitely an expensive purchase, but I will use it so much and I’ll have it forever.

My favourite purchase from my trip to Disneyland Paris last year is definitely my Big Feet Eeyore. I love that he reminds me of the parks and he is the cutest thing ever. If you follow me on Instagram you’ll have already seen him a few times because I’m a little bit obsessed… 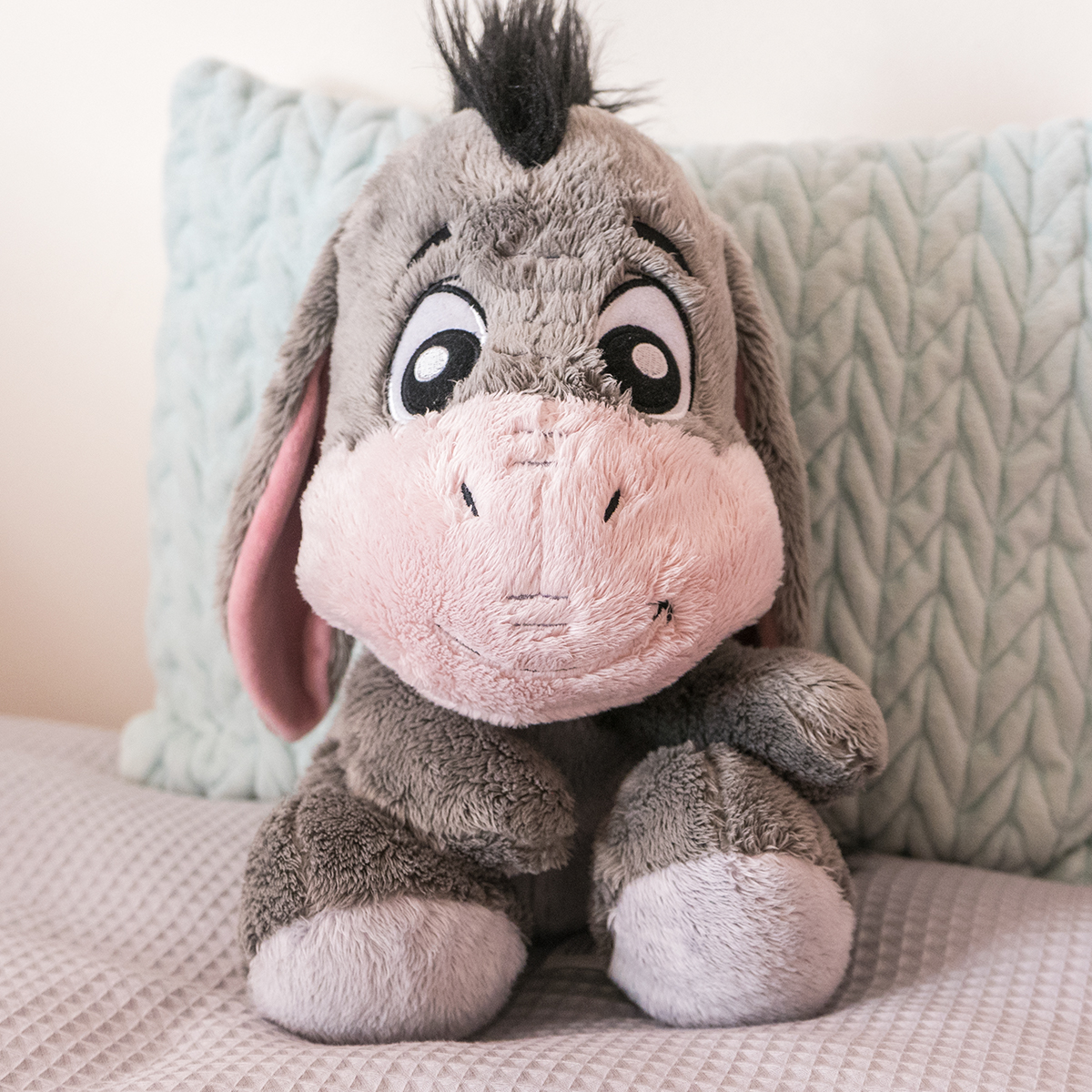 5) What is your favourite Disney attraction?

I’m going to have to cheat a bit again for this one, not sure I could narrow it down to just one attraction 🙈

For rides that feature in both Disneyland and Walt Disney World, I love Tower of Terror so so much! It is great fun and definitely one of the things I look forward to most when going to Disney. I do however prefer the Walt Disney World version, purely for the build-up and the exterior theming. It has much more of a ‘presence’ in Walt Disney World.

Another ride that I love in both parks is Haunted Mansion/Phantom Manor. A classic in my eyes. I love the cheesy humour and how the ride works. I personally prefer the version in WDW, as it doesn’t quite work the same when you don’t understand the language… However, I love the exterior theming of Phantom Manor so much! 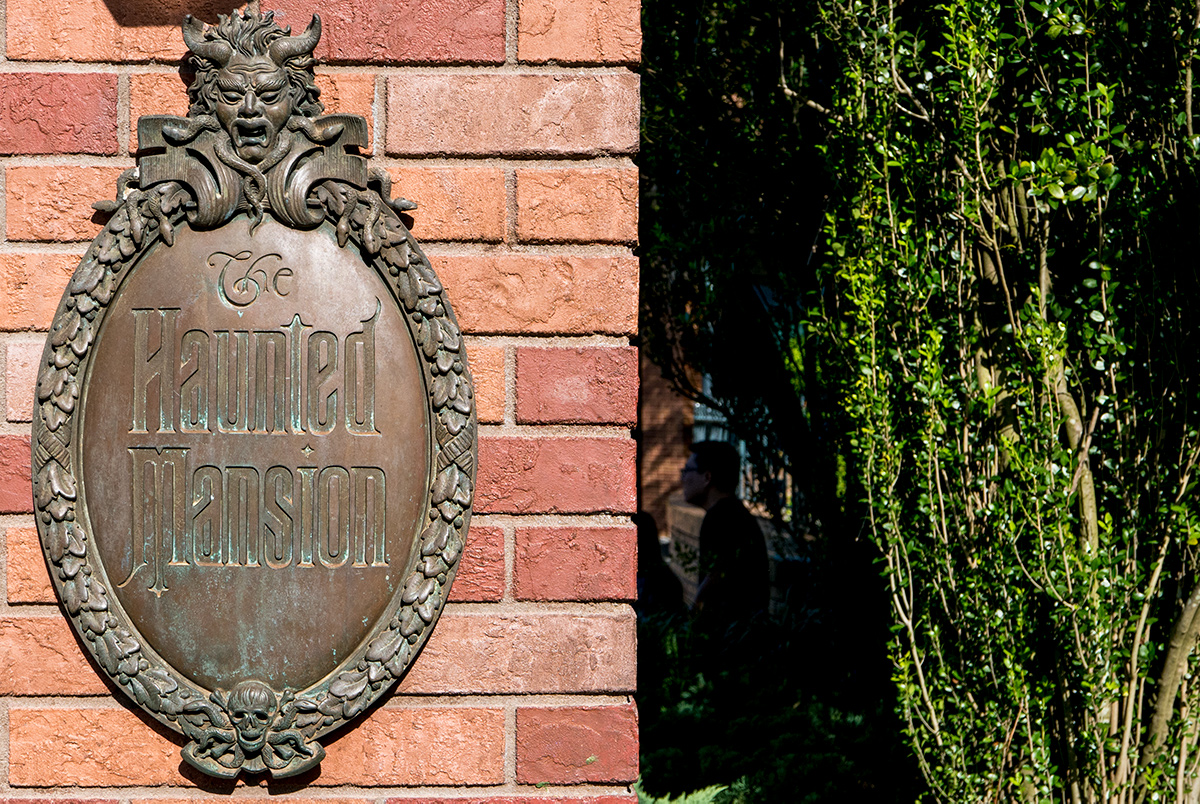 In Disneyland Paris, I love Ratatouille. It is such an amazing ride concept and design. I can totally understand why it is always so busy. Definitely a must-do. I am so happy that they are adding it to Walt Disney World so that more people can enjoy it! 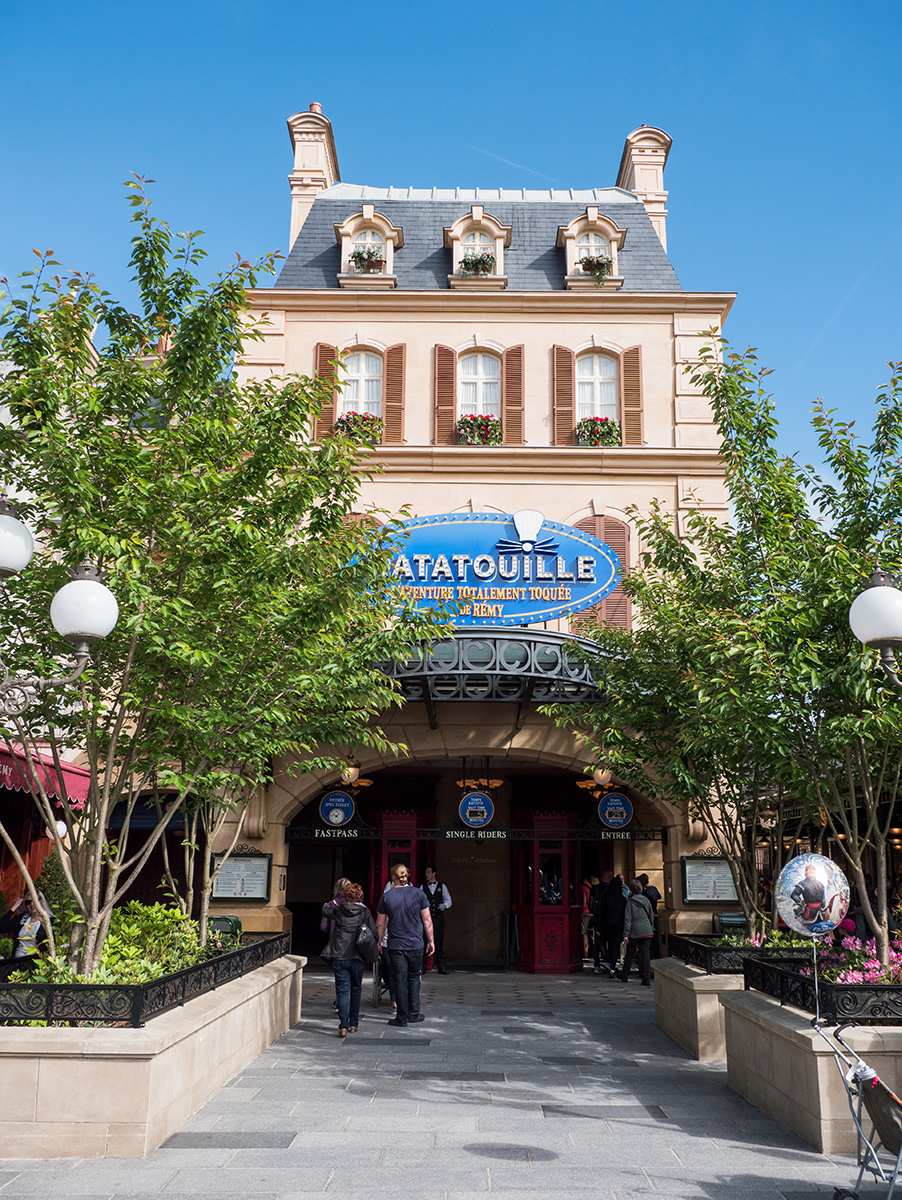 In Walt Disney World, I absolutely love Expedition Everest. I only rode it for the first time last year and really wish I’d braved it sooner. One of my all-time favourite rides for sure. Flight of Passage is just as brilliant and out of this world as people say it is. Disney went above and beyond for this ride, I couldn’t even begin to do it justice. Last but not least, Toy Story Mania definitely needs mentioning. It is such a unique concept and my whole family loves this one. Just saying that I won every time on out last trip… 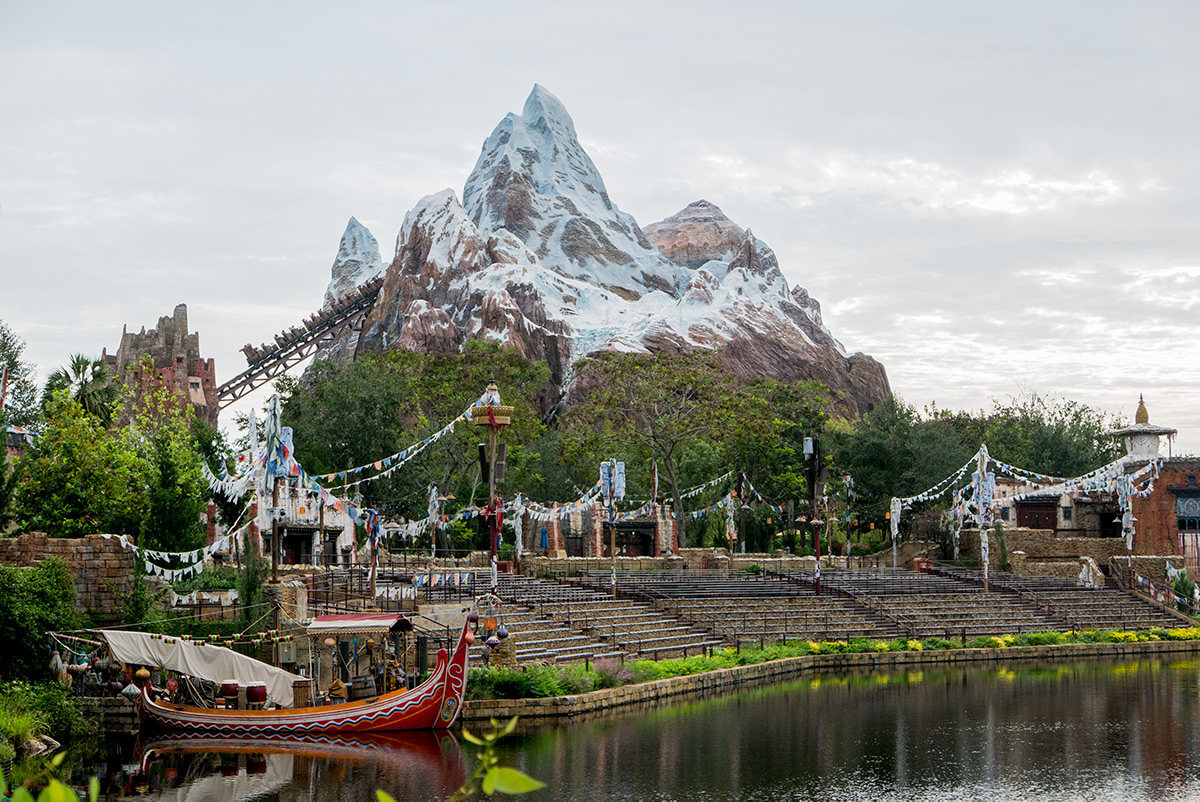 6) Which character do you have to meet when you go to a Disney park?

Mickey Mouse for sure. You have to meet the Main Mouse! Also, I have to meet Winnie the Pooh. He is just too cute not to meet.

7) If you could build a Disney attraction based on your favourite Disney movie, what would it be?

I would love a Tangled ride. The ‘Tangled Toilets’ in Magic Kingdom show the amazing job imagineers can do with Tangled, and I think they would make such a beautiful ride. It is one of my personal favourite movies, so I would love it to be represented more in the parks.

Mary Poppins is another film that totally deserves a ride. I’m hoping they put one in the United Kingdom Pavillion in Epcot at some point, especially as the new film comes out this year.

8) What is your favourite Disney parks restaurant?

The Crystal Palace is one of my favourite Walt Disney World restaurants. It is buffet style restaurant with Winnie the Pooh characters. You can visit for breakfast, lunch and dinner. The setting is lovely and I’ve always had a great experience. If I could only visit one character dining, it would always be The Crystal Palace. They catered perfectly for my peanut and tree nut allergy and I couldn’t have asked for much more. Plus who wouldn’t want to have breakfast with Winnie the Pooh? 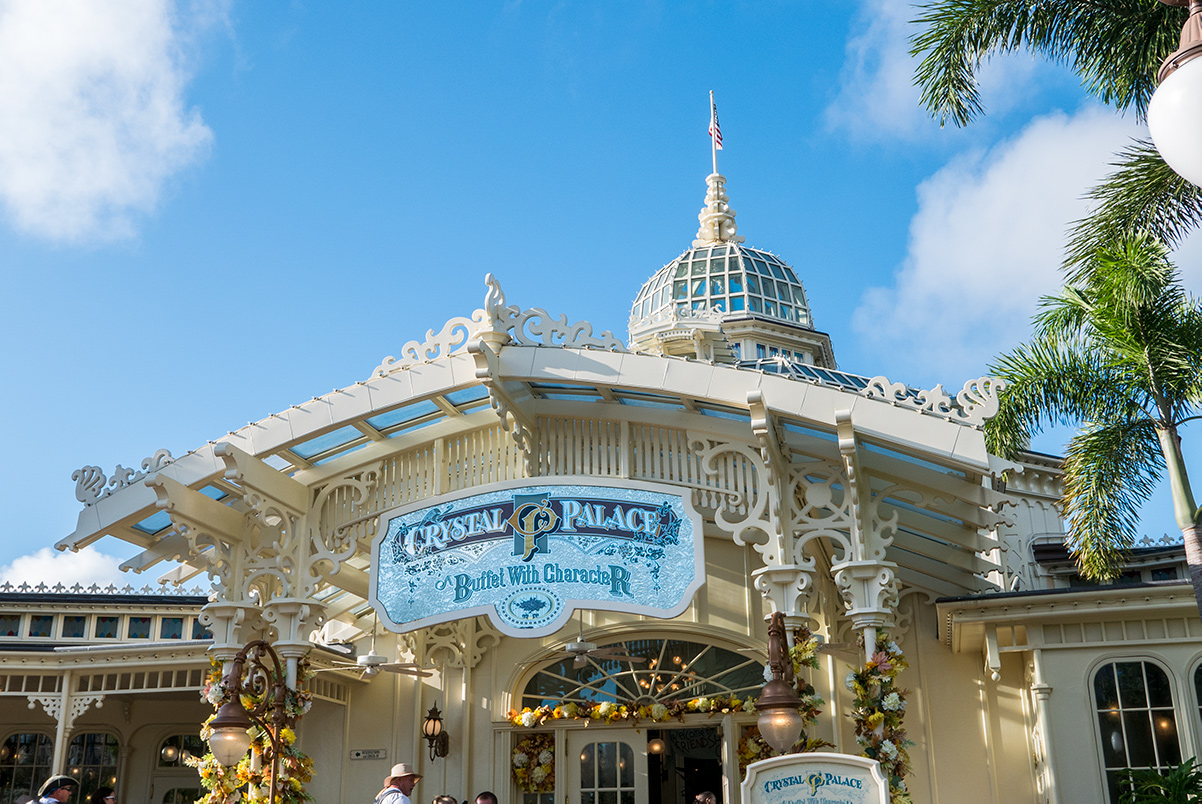 9) Describe a situation when a Disney cast member went above and beyond for you?

Having a nut allergy, I’ve come across many cast members who help to make me feel comfortable and want to do their best to make sure I don’t miss out. When I visited Chef Mickey for a character breakfast, the chef couldn’t have done more if he tried. He explained the buffet to me and offered to make anything I wanted from scratch. Cast Members can makes such a massive difference when eating with a nut allergy and is why Disney is somewhere I feel incredibly comfortable to eat.

10) Plan your dream Disney vacation. Include your perfect resort, restaurant, park and show?

I’m going to plan this with the idea of a Walt Disney World vacation in mind. I don’t really have a favourite resort per say, but I would love to stay at Animal Kingdom Lodge in a Savannah View Room. I might as well go for one of the 2 bedroom, Club Level Suites if it is a dream vacation we are planning. I would love to wake up animals roaming about outside my room. It looks like an amazing place to stay.

For a restaurant, I would pick Crystal Palace for breakfast with Winnie the Pooh and friends. For somewhere I haven’t been, I would pick Be Our Guest.

For a park, I would pick Animal Kingdom. It would be wrong not to if I was staying at Animal Kingdom Lodge. I’d also get to ride three of my favourite rides, Expedition Everest, Flight of Passage and Kilimanjaro Safari.

I would pick Wishes as my dream show. Even though I love Happily Ever After I would love to see Wishes again.

I hope you enjoyed reading my answers to ‘The Disney Parks Tag’ and if you have a blog then why not join in! Be sure to let me know if you decided to answer them as well.

I’d love to hear your thoughts to my answers in the comments!